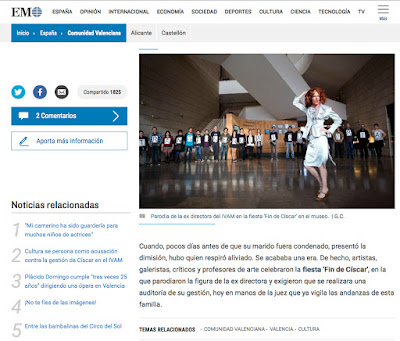 This week the inevitable finally occurred. The ex director of IVAM, Consuelo Ciscar, Valencia's local answer to Chris Dercon has been hauled to the courts for corruption (The Independent published an article in English about her last year when she resigned her post). The photo of me dressed as Ciscar pictured above comes from this week's digital version of Spanish newspaper El Mundo. Ciscar will be judged in the same court which put her husband local politician Rafael Blasco in prison for 6 years. There are various charges against her including paying 1300% above the market value of artworks.

When I began imitating her and documenting my performances in this blog over three years ago, she was still in power and (as some told me) a potentially dangerous adversary.  I'm still not sure if she found out about my work but she was almost certainly aware of the performance pictured above when I, along with other artists and the local association of art critics(behind me in the photo), celebrated her resignation in last year.

Dressed in my bad Consuelo wig and suit, I read out a resignation speech which mentioned transfeminism and my disappointment over the lack of support recieved from the local art establishment. I ended the speech with a flamenco version of The Sex Pistols No Future with the final lyrics changed to "No Future for Trans... Transparencia!" since the action was organised to deman
(1) Transparency in the running of the museum, along with
(2) an independent audit of the museum's books.

The event was well documented by the assembled press but before we knew they would turn up I had been a little nervous since the local Valencian police have been known to bash people over the head at demonstrations and I can't run THAT fast in heels.

Well everything went well and it looks like that audit is under way! Thank goodness the Spanish are finally sweeping out the old (corrupt) regime and (hopefully ) ushering in a new one.

As a coda, our support goes to the new director (Jose Miguel Cortes) and his team trying to bring the museum back to some kind of contemporary relevancy with a pretty limitted budget. Next time I visit the museum in drag I hope I don't have to worry about being hauled off by the police!
Entrada más reciente Entrada antigua Inicio